Over eight years from its conception, Blockchain is considered as a ground breaking innovation in information technology (Abeyratne and Monfared, 2016). Known by most as the technology that enabled the wide spread of Bitcoin, Blockchain has lately sparked a huge hype around its potential applications. It is known as the first native digital medium for value, just as the internet was the first native digital medium for information. The technology enables a broad range of possibilities: “any sort of asset registry, inventory, and exchange, including every area of finance, economics, and money; hard assets (physical property); and intangible assets (votes, ideas, reputation, intention, health data, information, etc)” (Seppälä, 2016). Despite the technology is still in its early stages and it has not reached enterprise adoption yet, Blockchain applications advance far beyond digital currencies. Financial, health and energy sectors are just few examples of industries that can profit from the disruptive technology. As blockchain technology becomes more established in different sectors, supply chain IT experts, vendors and developers are also looking at its potential and use in the logistic sector. According to Korpela and Hallikas (2016), Blockchain represents the key element for the creation of the Digital Supply Chain. The disruptive technology is regarded as a potential means of establishing the integration of the different actors in the supply chain, enhancing the information flow among them and ensuring the security as well as the cost effectiveness.The logistic industry just recently took the interest in technology. Several blockchain solutions for logistics are already entering the market. In March 2017, IBM, the ITcompany, and Maersk, the Danish shipping giant (worldmaritimenews.com, 2017) started a joint developed project to create a blockchain platform for cargo information storing. The duo is working on a Blockchain solution able to reduce frauds and delays at customs, the time spent in transit as well as costs and waste. Similarly, TU Delft is working in a 16 partners’ consortium on a blockchain solution for logistics. The aim of the project is to develop a scalable technology to boost innovation in the Logistics Top Sector (tudelft.com, 2016). While IBM and TU Delft are working on the development of a Blockchain architecture, there are several start ups on the market developing applications for port logistics based on Blockchain technology. As described by Brenig et al. (2016), applications are Blockchain based software implemented on top of a given Blockchain platform to provide additional functionalities not initially available. Vawe, Solas VGM and Smartcontracts are just few examples of Blockchain applications. As an innovative player in port logistics, the port of Rotterdam is interested in inspecting the potential advantages brought by the disruptive technology, particularly by the applications that are currently on the market. Commissioned by Smartport and Portbase, this project aims to provide a clearer overview of the technology capabilities in the environment of the port of Rotterdam as well as a starting point for future research. Today’s hype on the technology created an environment of misunderstanding among the public at large. This chaos is selfreinforced by the negative association of Blockchain with the technology that enabled illicit transactions in some early applications of Bitcoin as a currency. Moreover, the polarization of its advocates, who often regard Blockchain as a panacea for all sort of problems, i.e. “one of the most important inventions of the 21st century” (Sparkes,2017), and the apathy of its detractors, e.g. Jamie Dimon the chief executive officer of JPMorgan Chase which define it as a “waste of time”, has contributed to increase the confusion on the topic. Therefore, this thesis aims to analyse the technology under a critical perspective, providing an objective description of the Blockchain feature, the potential use cases and the relative impact. 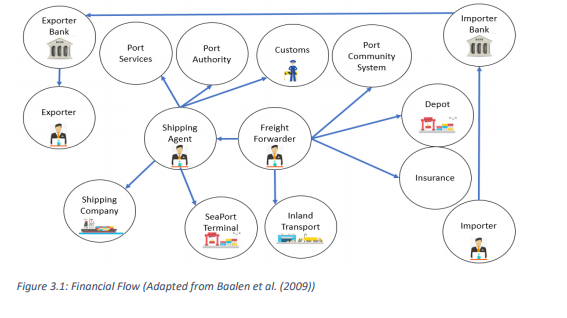 Since the initial stages of its development, blockchain quickly spread in different industries other than the financial sector. Supply chain and logistics, in particular, are considered as fertile ground for a blockchain implementation due to the several parties involved in the logistic processes and the lack of trust that usually characterize the industry. Eager to maintain its market position as largest port in Europe, the port of Rotterdam lately started to inspect the new opportunities brought by the technology. Despite the several private projects and startups that are blossoming in the market, there is still large uncertainty on the implementations and benefits of blockchain solutions for the industry. Moreover, the academic literature on the topic is still scarce. Therefore, this research aims to categorize the current market applications into four business cases based on the functionality they provide. These different uses of blockchain are subsequently analyzed under six different points of view in order to evaluate the expected benefit that the major stakeholder expect to gain from the technology implementation. Finally, the impact of these business cases is tested on the business model components of the current port information system, Portbase, to identify the disruptive power of the technology.

This research project started from the interest of Smartport (intermediary organization with the aim to align demand and supply for the port to participate in research) to evaluate the potential impact of blockchain to port logistics. The entrance of this new technology in the market not only raised Smartport’s interest, but it awed the entire port ecosystem for its promises of complete disintermediation and enhanced process visibility. Some of the largest players in the market have already signed partnerships with IT vendors (IBM-Maersk collaboration) to develop a blockchain solutions and exploit the first mover advantage. The SMEs, on the contrary, rely on the role of Smartport to develop a blockchain solution with whom the entire ecosystem would benefit. Similarly, the port of Rotterdam aims to keep its role as the largest port in Europe in the ever-growing competition on the Hamburg-Le Havre range, where ports such as Hamburg and Antwerp are growing in importance and size. This research project has Portbase as unit of analysis. The company’s perspective enables a detailed and un-biased understanding of the port process information flow. This is due to the neutral position of Portbase in commercial activities and the broad spectrum of the company’s activities in the port. Moreover, it enables the researcher to inspect the extent to which the current port information system is affected by the technology implementation. This double perspective on the issue corresponds to a dual objective of the research project.

On the one hand, this research aims to evaluate the impact of blockchain to port logistics; on the other hand, it aims to provide recommendation to Portbase on how to adapt its business model to a blockchain implementation. The analysis started with an extensive description of the import carrier process, which was chosen as the research case study. The reasons behind this choice lay on the several stakeholders and the large amount of information transactions that characterised this particular process. By analysing the current physical, financial and information flows, it was possible to identify the main sources of process delays and bottlenecks. Three are the main causes unveiled by the study: container reshuffling at the terminal, customs and commercial clearance, and hinterland transportation planning. All the three process steps require an increase in information sharing, as well as an enhanced information accuracy and rapidity. 6 To identify the impact of the technology on port logistics, some process KPIs were defined as an evaluation framework. In particular, the KPIs were selected to appraise the impact of some blockchain use-cases to the three flows of the port process. The blockchain business cases were derived by analysing the current blockchain market applications in the field of supply chain and logistics. By listing and analysing the several applications, the main functionalities were derived. This process resulted in the creation of four business cases of implementation, which are categorized based on the distinct use of the technology they want to make. The first business case aims to use the technology to store and transact cargo documentation; the second one focuses on process information; the third one aims to improve trade finance practices; and the fourth one aims to automatize the operations using internet of things and smart contracts. This business cases analysis consisted in a round of interviews to the main port process stakeholders to evaluate the potential benefits brought by each business case. The respondents agreed on identifying the first business case as a potential solution for customs clearance, since it ensures accurate and consistent information on cargo documentation all over the chain. Second, the interviewees unanimously agreed on the importance of process visibility on the total process performance. The business case has the potential to increase the coordination among the stakeholders as a result of more process information sharing. This business case would speed up the hinterland transportation planning as well as the customs clearance. Third, a blockchain solution for trade finance is expected to reduce the time required for commercial clearance. Enabling parties outside of the physical process (banks, insurane) to have visibility over the process is beneficial to solve bottlenecks due to sequential activities such as the commercial clearance. Finally, the respondents expect the fourth business case to have a significant impact on port logistics, but they identified it as a long-term scenario compared to the previous three. The impact of the blockchain business cases on the Portbase’s business model was evaluated making use of the business model stress-testing tool. This analysis started with a description of the company’s business model based on the CANVAS framework, which enabled the identification of the main business model components. Identifying the blockchain business cases of implementation as stress-factors, it was possible to determine which of the current business model components are more robust and which one could be affected the most. It was found that the blockchain business cases negatively impact the value offered by Portbase, as well as the customer and revenue structure. To face this potential issue of disintermediation; a set of solutions for Portbase on how to adapt its business model is developed. Based on the literature on the digital disintermediation, Portbase is suggested to play a role as an information, translation, trusted or monitor intermediary. In conclusion, this research has identified four blockchain business cases and evaluated their relative impact on port logistics. Subsequently, these business cases were used as stress factors for the stress-test analysis to provide recommendation for Portbase on how to adapt its business model. This led to the identification of new potential roles for Portbase as an intermediary in port logistics. The results of this research are valuable since the industry is characterised by huge hype on the technology but very little is known about its application and benefits. However, this research raised some new doubts. First, is the lack in process visibility a technological issue that can be solved with a blockchain implementation or is it an intrinsic feature of the supply chain that requires a mind-shift? Second, is blockchain going to disintermediate the whole supply chain or it generates new intermediaries? These issues represent some of the suggestions for future research, which could build on top of this report with the objective to clarify the real blockchain implementation in port logistics.