Why are we talking about blockchain?

We live in a world which has an ever growing need for improved efficiency. Supply chain management and logistics in particular require a secure and reliable flow of goods; this which must be achieved in combination with faster, cheaper and more efficient processes. One ofthe most important ways to attain such efficiency is by capturing and sharing data. For logistics, this means that there is real time access, reliability, visibility and integration of relevant data in order to allow for the right processes to happen at the right time. Especially in the port, where cargo makes a switch between different transport modes and routes, such data is of tremendous importance. In an optimal situation, all information that both leads cargo to its destination and monitors it is available and accessible to all relevant parties in an online environment, creating a so called digitalized port. On the topic of data sharing and the creation of a digital port, Ronald Paul, COO of the Port of Rotterdam Authority states that digitalization should be embraced, as it is a prerequisite for advanced logistics. What if we were able to create such a digitalized port in the coming decades? The Port Community System is a major step towards digitalization, but it might be in need of an upgrade. Some port processes are still very old compared to those in other sectors. There is redundancyof information regarding transactions and current processes are sometimes inefficient, still requiring phone calls and paper documentation.

Blockchain technology is definitely one of the most discussed topics in 2017 and could tremendously influence future port logistics and the digitalization of the port of Rotterdam. Some describe the technology as a simple distributed database which is hyped up by the developing organizations, while others iden tify blockchain as the digital revolution that will lead to social and economic changes. The potential of blockchain technology lies in exploiting and extending networks. The technology can connect parties that were not previously connected, enable new f orms of collaboration and create new business opportunities. In port logistics, blockchain has the potential to transform and disrupt port processes by documenting, validating and securingeach event in the chain. Promising applications of blockchain already exist in port logistics and many other applications and business models will emerge as the technology matures; a similar development occurred following the initial introduction of the internet.Trade finance, product traceability and process automatization through smart contracts represent some of the most promising blockchain implementations for supply chains. However, these applications need different enabling conditions in terms of large scale implementation by market parties and the time frame for this implementation is also expected to differ from case to case. This research aims to de hype the technology and evaluate its real potential with regard to port logistics. It tries to provide an overview of the current implementations and the future deployment of blockchain technology. First, we would however like to offer a brief (technical) introduction to blockchain technology in the next chapter. 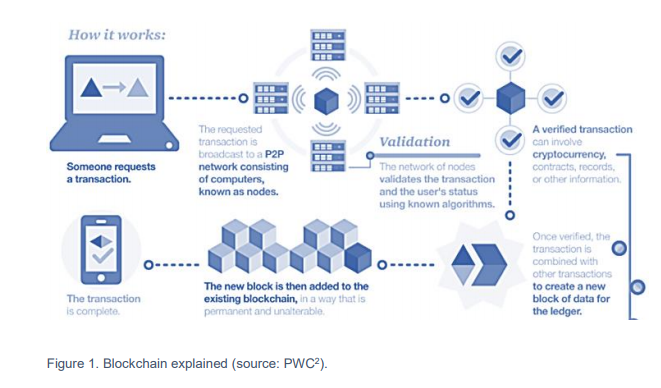 The goal of this paper is to provide clear insight into how blockchain technology could contribute to the improvement of port logistics and the development of the digital port. In its capacity as a peer 2 peer distributed database, blockchain technology could add value in terms of trust, network expansion, visibility and more. Data is easily accessible whilst its safety is still guaranteed. This is because the partners involved in the network validate the data.Currently, the technology is mostly in the single use application stage. Blockchain technology is mainly used in niche markets at this point although more advanced applications are under development. The future of the blockchain will be determined by further research and a better understanding of the technology as well as the ability of society and the sector to adopt.