Background and context Distributed Ledger Technologies (DLT) have received growing attention in recent years as an innovative method of storing and updating data within and between organisations. The key features of DLT/Blockchain, as distinct from other databases, are associated with its distributed nature. Multiple copies of the ledger are held by different parties, with data added by consensus and without the need for a third party. This means that DLT/Blockchain is able to offer: • An immutable record: Data added to the ledger is in theory unchangeable, secure and preserved for the life of the ledger, with the agreement of all participants as to the contents. • Disintermediation: Nodes are able to interact directly, without the need for an intermediary. This includes the ability to initiate direct transactions of data or digitised assets (which may be a dedicated cryptocurrency, such as Bitcoin, or a digital representation of real-world assets, such as land titles or fiat currency). • A lack of central control by one party. Additions to the ledger or changes to the governing structure are decided on a consensus basis by multiple participants. • New opportunities for management and sharing of data. These opportunities are achieved by facilitating the storage and access of various forms of data for participants. Together, these systems provide a transparent and verifiable record of transactions. As a result, DLT/Blockchain can provide gains in efficiency, trust and data reconciliation among ledger participants. While the financial sector has shown widespread early interest in DLT/ Blockchain, its use has also been explored in education, the creative industries, and the agriculture and food industries (to name a few). Research objectives Standardisation efforts related to DLT/ Blockchain have recently gathered momentum with the setting up of the ISO technical committee on Blockchain and electronic distributed ledger technologies (ISO, 2017a). Against the backdrop of this changing landscape, the BSI commissioned RAND Europe to carry out a rapid scoping study to understand some of the areas related to DLT/Blockchain that would potentially require standardisation based on stakeholder needs in the UK. The study is intended to inform the BSI’s approach towards developing a standards strategy in relation to DLT/Blockchain. In addition, the research will x Understanding the landscape of Distributed Ledger Technologies/Blockchain be used by the BSI as input to hold discussions in the context of the ISO technical committee on DLT/Blockchain. More specifically, the purpose of this study is threefold: • to explore the potential role of standards in supporting DLT/Blockchain based on the needs of stakeholders; • to identify what sectors could benefit most from the advent of DLT/Blockchain standards to accelerate implementation of the technology; and • to identify key stakeholders that would need to work together on developing standards related to DLT/Blockchain. 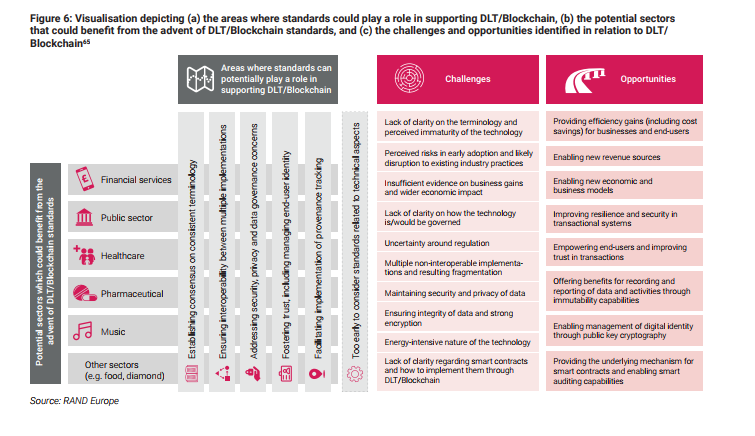 The evidence from the literature review and interviews on the role for standards suggests the need for a measured approach to developing standards in the near and medium terms. Although a majority of interviewees agreed that standards have a role to play in shaping the development and adoption of DLT/ Blockchain in the long term, most of them were also of the opinion that additional time may be needed to enable a more informed approach to deciding which aspects and uses of the technology should be prioritised (INT02; INT03; INT04; INT05; INT06; INT10; INT12; INT13). Similar analysis is presented in the literature, with De Meijer (2016), and SWIFT Institute (2016) suggesting that further clarity is needed on the overall technological landscape for a stronger case for standards to emerge. At a House of Lords Select Committee on Economic Affairs’ Inquiry on Digital Ledger Technologies conducted in July 2016, it was suggested that the case for standards would become clearer after commercial applications are available more widely to the industry and the market is more evolved in terms of the use of DLT/Blockchain (The Select Committee on Economic Affairs, 2016).63 In arguing for a better prospect for standards in the medium and long term, one interviewee (INT11) suggested that once the technology is more mainstream and a better understanding of its strengths and weaknesses emerges, the priorities for standards will become clearer.
While discussing medium-term possibilities, another interviewee (INT10) emphasised interoperability as a key outcome to be targeted. It was also suggested that, given the likely disruptive influence of the technology, some aspects (e.g. technical aspects of DLT/ Blockchain) of standardisation may develop in a longer time frame than others (INT10). The same interviewee suggested that in the near term, initiating and fostering a discussion with various stakeholder groups on standards could be crucial to developing a shared understanding of their needs.

Our analysis suggests that standards could prove to be important to the wider development and adoption of DLT/Blockchain. We have identified several areas where standards could – to varying degrees – potentially overcome the challenges and could support innovation, growth and competitiveness in the DLT/
Blockchain ecosystem. Some of these areas, such as standards in the context of provenance tracking and management of digital identities, are more specific than others (e.g. standards to ensure interoperability and consensus on terminology). Generally, standards were seen as being important to facilitate trust and support innovation and thus the development of new applications. In addition, standards were also seen to have a role in coordinating and ‘defragmenting’ a market constituted of ‘piecemeal initiatives’ and to ‘unlock network effects’ (Digital Catapult & Open Data Institute, 2016; also INT01; INT09; Mainelli & Milne, 2016). This would help to build market confidence and to allow the coordination of various actors within and across sectors to foster convergence
(INT09). The process of standardisation enables stakeholders to ‘stop and think’ about the use of technology to solve social problems and to enable ‘legibility’ (Narayanan as quoted in Schepers 2016). As mentioned previously, the priority areas we have proposed in our analysis are not intended to be definitive or prescriptive. The aim is to provoke further exploration of these topics in a collaborative manner by stakeholders within the wider DLT/Blockchain community about the potential role of standards in supporting the development and adoption of the technology. In Figure 5, we illustrate these priority areas and provide an approximate indication of the relative timelines for potentially developing standards in relation to these areas. To reiterate, our analysis suggests that, despite the consensus on the overall importance of standards to support the growth of DLT/Blockchain, views
differ with regard to the areas for potential standardisation and the timelines for developing and implementing the standards. The timelines shown in Figure 5 are indicative at this stage and are based on our examination of the DLT/Blockchain ecosystem established through the rapid scoping study we have undertaken. Further research and continued engagement with the stakeholder communities that would input to them is needed to establisha better understanding of the timelines for
developing standards.