It definitely was a unique experience, a once in a lifetime opportunity. Four students from the logistics program in Venlo were able to fly to Detroit to participate in the General Motors Supply Chain Competition. This competition was hosted by our partner Waynestate University and General Motors (GM) as the main sponsor.

Fontys Venlo was privileged to participate as the only European university. In total 25 teams competed in the challenge, 5 international teams (Brazil, China, Taiwan, Mexico, NL) and 20 domestic teams (all US). The teams were divided into 5 “regions”. Fontys shared the region with Tec de Monterrey (Mexico), University of Northern Texas, Pennstate University and Western Michigan University. Congratulations to Mexico who made it to the finals!

Rabea Feistauer (GER), Roel Beumers (Dutch), Giel Hofstee (Dutch), and Georgi Dzhurov (Bulgarian) (from left to right) were the students who were selected to take the challenge, all of them in their 4th study year of Logistics Engineering. They were accompanied by the lecturers Marianne Peeters and Sophia Gruner, both from the Logistics team. 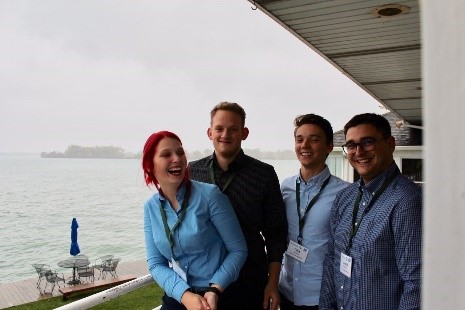 What was the challenge?

Four weeks before the actual challenge, the students received the case. The case was written by GM and addressed a current challenge GM faces. The central question: how can GM meet customer expectations of having enhanced safety features in all cars by still reaching their financial targets. The students were put in the role of an internal supply chain consulting team, who had to give advice from their perspective. The target was to come up with creative solutions around supplier relationship management, logistic processes and of course costs.  The results had to be presented in a report and in a presentation. For the preparation of the case, the students received two intense presentation trainings by Howard Lettinga, speaker coach at TedxVenlo and communications trainer at Noblahblah. 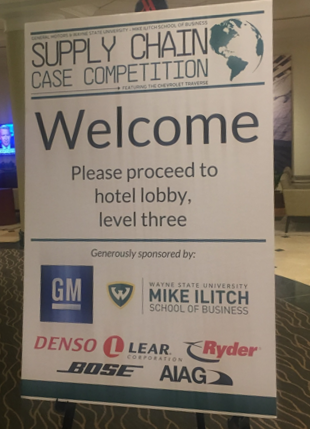 Detroit and the time there

Detroit for sure is known as being Motown, the automotive city and probably also as the city who has suffered a lot from different ethnic and economic crisis. It’s therefore great to see that the city rejuvenates through huge investments into property and infrastructure. Downtown Detroit has so much to offer, shops, nightlife, culture. During the week in Detroit the student teams had a varied program of visits. They visited f.eg. the  Ilitch School of Business (Waynestate) or the Henry Ford museum. The teams were sleeping in GM’s headquarter where the Marriott Hotel has its location. Absolutely impressing.

Thanks to Waynestate University for being such a great partner and thanks to all the supporters who believed in the team.